Today’s dinner is the first of my blog posts using recipes from my mum’s old recipe folders – clippings from various newspapers such as Good Food and Vogue Travel.

Seeing as I had to work all day today, interviewing babies for nursery, I wanted tonight’s dinner to be easy and quick. Step forward, “Chicken with Lemon Grass”, origins unknown (as the magazine name was not included in the clipping). Below is the original recipe, from my mum’s folder marked “Main Courses, Poultry, Red Meat”. I’d like to point out that while I’m sure Mum started these folders with a system, she clearly gave up at some point and just shoved things in willy-nilly, as there are vegetarian dishes in this folder (and chicken dishes in the vegetarian folder – although to be fair that is also marked as “starters”).

Anyway, here is the original clipping:

I made the shopping list yesterday, when I had decided what I wanted to make, so really I should have done a better job at realising I needed vegetables. But, I didn’t. I want to blame six day weeks for the past three weeks. I want to blame this cold that has been dragging me down for over a month now. I want to blame lack of sleep. And I’m going to. But, to be honest, normally I grab veggies while I am at the supermarket anyway. Except this time. I was so tired after work, the traffic had been awful, and I just wanted to get home. So I followed my shopping list… and completely forgot about any veggies to go with the main meal.

When I did finally get home, I set about making the lemon grass, chilli and ginger paste, which I rubbed over the chicken and set aside for 30 minutes.

What the pictures don’t show you is the washing up I needed to do from yesterday. So while the chicken was marinating, I washed up. At this point, I’d also put the rice on in the rice cooker – the joys of being brought up in Asia means we only know how to cook rice in a rice cooker. I say this with a mild tone of sarcasm, because we do know how to cook rice other ways… but why would you?

I digress. Once the chicken was marinated, and the rice was on, I heated up the groundnut (peanut) oil and threw in the garlic slices. Once the chicken was also cooking, I added the onion – so much onion. I think I’d half the amount of onion when I make this next time, or triple the amount of chicken. There was a lot of onion. At this point I also added some mixed frozen vegetables. I needed to have some colour in there, and some veggies and this was my only available option. 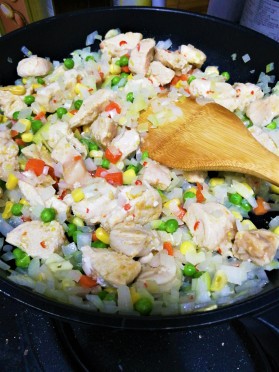 I need to also state that while dicing the onion, I managed to slice my finger (and part of my nail), so I took a quick break to compress and bandage. There is no point in pretending that I am a pro and I don’t cut myself by accident from time to time.

Once the chicken was cooked, it was time for a splash of fish sauce and a sprinkle of sugar before serving it up with the rice. 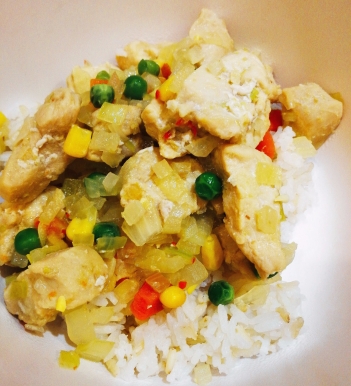 Now, while I accept that there are things that I would change about this recipe, for a first time making it – I am impressed. Personally, I would double all of the paste ingredients to give more of a kick to the chicken, as well as cutting down the onion and adding some greens. But it was quick (50 minutes in total from start to finish, including marinating), and super easy. It was also particularly easy because all of the ingredients are readily available in supermarkets around Hong Kong. I’m not sure how easy this would be in a British or American supermarket because I’ve never tried to buy lemon grass from there.

This one was definitely a winner, and I will be making it again for easy work lunches and late-finish dinners.

Here’s my adaptation of the recipe: