I was a late-comer to the potato salad party. I never really understood the idea of cold potatoes and mayonnaise. Even to this day, too much mayonnaise kills any dish for me, but one day about 10 years or so ago, I decided to give some homemade potato salad a try. And I didn’t hate it. I can’t said I loved it, but I was starting to understand why people enjoyed eating it.

Then, I tried making my own, as my boyfriend at the time wanted to give it a go. I added a lot less mayonnaise than I’d seen in other potato salads, and upped the amount of crunch from the spring onions and bacon. And yes, it was good. I made it a couple more times before ditching the UK (and the boyfriend) to run back home to HK.

Since then, I don’t think I’ve ever really made it, as it’s not something that’s usually at the top of my list when I think of food to make for diner or lunch. However, with the whole concept of trying to use up what I have in the fridge, I realised I had a few Maris Piper potatoes that were about to go off. Plus, I had leftover sriracha aioli from the chickpea burgers. I knew that potato salad was the way to go.

But this would be no ordinary potato salad; yes, there would be bacon and spring onions. However, with the addition of liquid smoke to the sriracha aioli, this was going to be a spicy, smoky potato salad that would be hard to put down.

Luckily, I only had 3 large potatoes left, so I couldn’t make a massive bowl (just enough for two healthy portions, or three small portions). Otherwise, I may have sat there and gobbled up the whole thing. It goes really well with a chickpea burger patty as well!

So, for those of you who are looking for a different twist on a classic dish, here’s the recipe. I’m giving the recipe as I made it, for only two large portions. But feel free to scale up to as much as you need (especially if you’re taking this for a pot luck that will cater for 20 people). 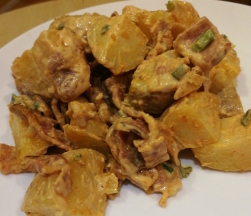