I’ve taken a lot of inspiration from Jamie Oliver recently, including the recipe in today’s post. And I use the word inspiration, because sometimes I find that the ingredients used aren’t ones that I am a huge fan of.

As mentioned in my previous post, I’m trying to find healthier recipes to incorporate into my daily life, and while some of the recipes are likely to be used again and again, others might only get used every now and then.

I had a busy weekend. I had a friend’s birthday brunch which lasted for 5 hours – although we didn’t eat too much. There was an antipasti buffet, which was really delicious – lots of good cheeses, salads and veggies. There was also a lot of alcohol – woops! But, to top it all off, the birthday girl surprised us by organising a Ceilidh at the brunch! It was such good fun. I’m pretty sure everyone had a great time.

So, Sunday was spent running errands, doing laundry, food prepping for the week – you know, the fun stuff. Which is where easy and quick recipes are coming in handy. This broad bean salad takes 10 minutes from start to finish, if you use jarred roasted red peppers. I made my own, which meant an hour of roasting in the oven and then sealing them for another hour, to steam them, before peeling the skins off and using them in the salad. Don’t worry. You don’t have to do this. You can just buy a jar of roasted red peppers – it’s much less time consuming (but a lot more expensive in Hong Kong).

The original recipe called for Manchego cheese which would definitely work well with this, but I couldn’t find any and realised that Compte would go just fine. Unfortunately, I don’t have a fine cheese slicer, so my pieces of cheese are a bit chunky and my brain didn’t think to use my potato peeler. Feel free to use your own preferred cheese.

Feel free to mix up the herbs in this recipe as well. Jamie’s original recipe used a lot of parsley, and the leaves were not chopped up that much. I don’t mind parsley, but that was just too much parsley in a mouthful for me. So, I added the mint, and chopped up the parsley more finely (although this isn’t shown in the photos, as I took photos only of the first plate, not the second when I chopped everything into much finer pieces).

This salad would also go great with some bacon or panchetta if you wanted to add a bit of meat to it. 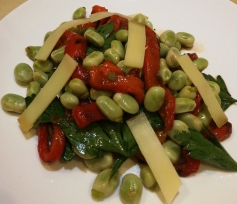