A while ago, thanks to a Reddit Gift Exchange, a stranger sent me a wonderful cookbook that was on my Amazon wishlist. This particular cookbook was created for lovers of all things cookie dough, and is aptly titled “The Cookie Dough Lover’s Cookbook” by Lindsay Landis, from the blog Love and Olive Oil. Just like it says on the cover, every recipe in this book contains cookie dough in some form or another.

A couple of years ago I made the cookie dough cinnamon rolls for an Easter weekend breakfast, and they went down a storm with my housemates! Since then, I’ve not really used the cookbook, although it does get flicked through A LOT!

I decided, given that I had an “International Pot Luck Holiday Dinner” this weekend, that I would whip up a new dessert that I had not yet tried out.

Enter the cookie dough cheesecake. Technically, the actual recipe is the Cookie Dough Mosaic Cheesecake, but I only used one type of cookie dough instead of three. This is because of two things: access to ingredients, and convenience. White chocolate chips (as used for the reverse cookie dough recipe) are not easy to come by in your average Hong Kong supermarket. I had to make a special stop over in a gourmet supermarket just to get sour cream.

Anyway, going off track. I actually made this cheesecake over two days, as I have had so much going on during the week that I genuinely was struggling to find time. Of course, when it comes to cooking (or baking) more often than not, I will make the time.

The build up to Christmas is hectic, and with only four working days left, everyone is trying to meet up before they go on holiday, or trying to get all last minute bits and pieces done before the end of the year. It’s a crazy, busy time of year – but I love it. 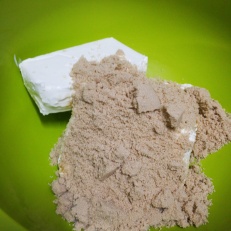 With every evening this week being booked out with something – some optional, others not – I carved out a few hours over two nights to get this baby out. 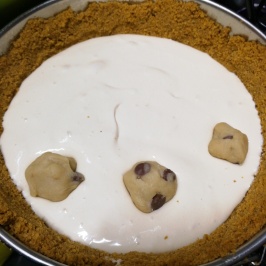 I have to admit, I made the crust a bit thicker than was intended, due to my over-eagerness with the digestive biscuits. But, luckily for me, my friends love the biscuit base of cheesecakes, so that was fine. Because my springform cake pan was deeper, and not as wide as the one used in the recipe book, my cheesecake needed about 15 extra minutes in the oven to ensure the cake was cooked through.

I did put an extra layer of sour cream mixture (sour cream, vanilla and sugar) on top of the completed cheesecake, to add a bit more a zingy flavour to contrast the sweetness of the cookie dough. It didn’t look very pretty – I’m still working on that presentation thing, but everyone loved it. There were requests to take some home and people were coming back for seconds. 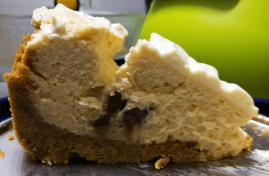 I had leftover filling, as my base was quite thick – so I made cupcake-sized cookie dough cheesecake bites. Hopefully everyone that gets one will love them!

I can’t produce the recipe on the blog, due to copyright. I don’t want to upset anyone, or get into trouble for a silly thing like that. However, you can find the recipe for Lindsay’s Chocolate Chip Cookie Dough Truffles on her blog, as well as a recipe for a New York Cheesecake. The Cookie Dough Cheesecake recipe doesn’t use as many eggs, nor are they separated, but the general idea is the same.