As the weather gets warmer, there becomes less of a need for warming food. Having said that, it’s also a great time to avoid getting hot in the kitchen, so the slow cooker comes in handy.

This recipe can do perfectly well in a large pot, over a hob, in 40 minutes. But, if you happen to be making multiple things at the same time, chucking these ingredients into the slow cooker gives that extra space.

I’ve been maintaining a mostly vegetarian diet over the Easter holidays, mainly because I want to try and use up things that I have in the house – vegetables, lentils, potatoes, rice…. it’s easier to save money if I use everything that I have at home and only buy a few ingredients that might be necessary to complete a dish.

So that’s what I’ve been focusing on. Granted, sometimes I only have two ingredients for a certain dish, so I buy a few more things to bring it together – but I’m working on buying as little as possible in order to use what I have in the kitchen. 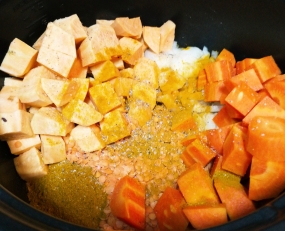 I think there’ll be a fair bit of bread making over the coming weeks, to use up some strong white/bread flour I’ve got in the house. Freshly baked bread is delicious!

I also need to make sure that I don’t make too much food, given that most of this week I will be out of the house for at least one meal, if not two. Luckily, I also know that if I make too much of something I have plenty of friends who would be happy for me to show up on their doorsteps with food. 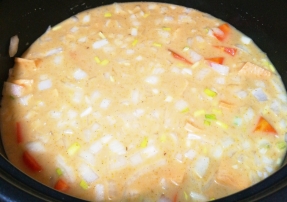 So today’s recipe comes about because I had an almost-full bag of red lentils, and I wanted to make something hearty that could also be frozen if need be. I also had a large pot of Greek yoghurt and some left over self-raising flour. 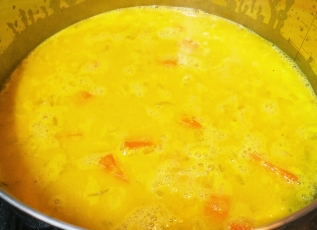 After doing some internet research, I realised that the best thing to do would be to make a curry (I had all the spices and vegetables I could need), and stick it in the slow cooker. I’ve adapted the recipe from a few places, and played around with the spice mix – so feel free to do the same if you choose to make this curry. 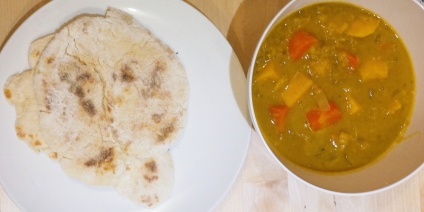 *If you prefer to make this on the hob, use a bit of coconut oil in a large pot. Brown off the onions. Add all of the vegetables to the pot and stir for a few minutes. Add the spices, vegetable broth and lentils, along with the ginger and coconut milk. Mix well, bring to the boil and simmer for 25 – 30 minutes (or until carrots and potatoes are tender).