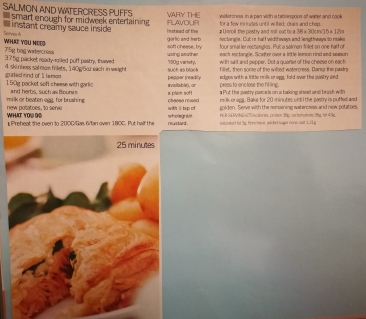 I mentioned in my last post that I’m trying to use up things in my kitchen, so a lot of the recipes I have been making are trying to make use of things I already have. Having said that, I find my fridge fuller than ever because I want to use fresh vegetables all the time, and I have a few things up my sleeve for later on. 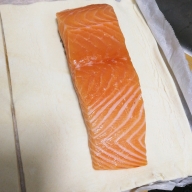 I’ve been going through my freezer as well, trying to make use of what’s in there (and clear some space). I have two different types of pastry dough in my freezer, but I forgot to label which one was which, so am going to have to defrost those and make something with them when I’ve worked out what they are. But that’s easy enough – galettes and shortcrust pies just need filling!

Today’s recipe comes from the need to use up the puff pastry in my freezer, and because making salmon wellington, or salmon en croute is something I’ve wanted to make for a long time. Mum made it once in a while at home, but beef wellington was more her style. I took the recipe from a magazine clipping (yes, we’re back to those), and adapted it to what I wanted to do. I added spinach for a bit of extra greenery, but also because I was buying spinach for another dish anyway.

Now, this isn’t the healthiest of dishes, but it’s a pretty easy mid-week dinner, especially if you chuck it on a bed of spinach, and add some potatoes on the side.

The salmon wellington I made was big enough for two people, but you can just increase the number of fillets, or use an entire boned salmon for a large, family-style wellington.