I have a friend who is fairly pizza-obsessed, even more so now that she’s pregnant. I was chatting to her over the typhoon days off that we had, and she suggested I make pizza. I didn’t have cheese in the house, so opted not to make it that day. But, I did make it over the weekend instead. 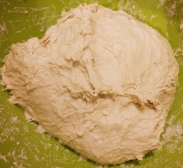 The beauty of making your own pizza is that you are in control of what goes in and on it. You can use as much or as little sauce as you desire, whatever toppings you dream of. Nothing it off limits when you make your own pizza. Except bananas. I have issues with anyone who thinks that bananas are okay on a pizza. It’s a thing in Sweden apparently, and I am not comfortable with it. Anything else though, I mean… have at it.

The dough is not hard to make, and it doesn’t take long… you can have 2 pizzas ready to eat within and hour and 15 minutes if your oven is big enough for 2 pizzas at a time. Mine is not. So I made one for dinner, and made the second one later then packed it up for lunch at work the next day. Those who ate it at work were very happy that I was feeding them – again. I have to admit though, it was one of the best pizzas I’ve ever tasted. Granted, it was to my taste, but still.

The sauce is so flavourful, and if you go down the route of caramelised onions, it adds a whole other level of flavour.

I know pizza isn’t everyone’s cup of tea, and it certainly isn’t a healthy option. Having said that, making your own pizza is a much healthier way to have it rather than ordering it from anywhere. Like I said before, YOU control everything about the pizza. You can choose how healthy or unhealthy to make it.

We used to have a house up in the Rocky Mountains, which my parents would rent out for most of the year, but we would head up during Chinese New Year for a week of skiing, or during the summer for a month of mountain activities, and summer camp. One memory I have of our time at the condo was that we’d almost always do the same thing on our first night in town. It would normally be me, my mum and my sister that would arrive first with my dad arriving a bit later. We’d always need to stop by the liquor store for a bottle of wine before we got to the condo, because the shops would shut stupidly early and they’d always be shut on Sunday (the day after we arrived). Once at the condo, we’d call up the same pizza place and we’d order the same pizzas. I’d order the Lombard Street. A pizza with a barbecue chicken and onions., with a barbecue-style sauce. Oh man. I still remember it like it was yesterday. Weirdly enough, it still exists to this day (I Googled it)! 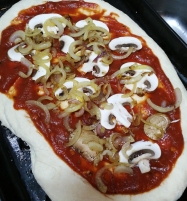 Anyway, I digress. The point is, that was the last great pizza I really remember having. The one that sticks in my mind. Don’t get me wrong, I’ve had nice pizza in my life. New York had some great pizza to offer, but there was always just something missing. Sometimes I think it’s the barbecue sauce. Sometimes I think it’s just a matter of toppings. I don’t know. But, I realised that if I was going to make pizza, I needed it to be MY pizza. For me. 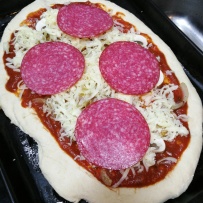 So, here are my recipes for pizza dough and pizza tomato sauce. The toppings in my pictures are: mushrooms, caramelised onions, salami and good old mozzarella cheese (NOT pre-grated).